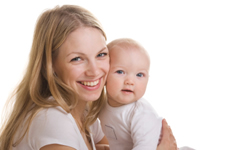 They've kissed countless boo boos, can see kids' antics from the back of their head and have racked up more miles than a New York cabbie. In honor of moms everywhere (including right here in California), we've compiled some fun facts about Mother's Day! Consider it our little "gift" to mom!

Happy Mother's Day from all of us here at Onstad's Insurance!

More From This Week

Give us some info and we'll get quotes from multiple companies.